The office and commercial building Wolf Marszałkowska is in the central point of the city, at the crossing of Marszałkowska and Żurawia streets. The first one is the main historical artery of Warsaw, but its potential is still not used completely. In the project we wanted to create a space, which would invigorate this part of the city centre and add it the features of a European metropolis.

The new building penetrates the Marszałkowska street with a bay made of many planes of curved glass. The curve of the lower edge of the glass elevation makes a roofing over the main entrance and invites the pedestrians to walk into the shopping passage, which connects the Marszałkowska and the Żurawia streets.

By the differentiation between the heights of two parts of the building, the object perfectly fits the rhythm of a busy street. Its geometrically divided elevations bear associations with the building on the opposite side of the street. The stones passing by on particular floors create a rhythm of lit parts and invigorate the street even in the most gloomy days.

To recreate the climate of the pre-war tenements we designed an internal yard. The glazed atrium, full of light, is finished with the best quality granite. The escalators go up from the busy ground floor to the exclusive office hall suspended in the space, two storeys higher. The office spaces designed around the yard have the features of a flexible layout and create the climate of elegance. The view from the offices, behind the curved glass, is a distant perspective of the Marszałkowska street.

The object corresponds perfectly with the rhythm of a busy street.

The consequence of the unique location of the object is the exceptional nature of the architecture that we propose. We wanted the future users of the building to enjoy the highest class working conditions and at the same time we wanted to give them the possibility to use the rich offer of the city in the very heart of growing Warsaw. 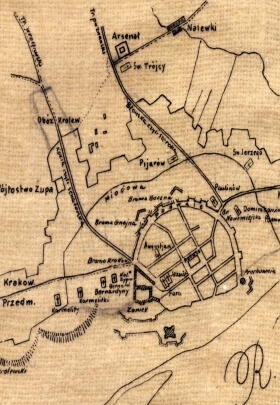 In the 17th century the plot in the place of the present Marszałkowska street belonged to the Congregation of Missionary Priests. 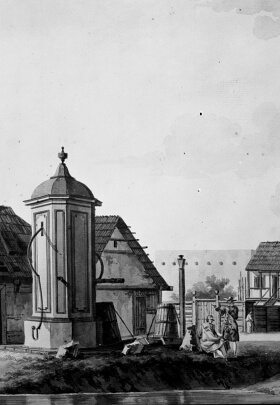 In 1770 the Marszałkowska street received its present name – to honor the Grand Marshall of the Crown, Franciszek Bieliński. 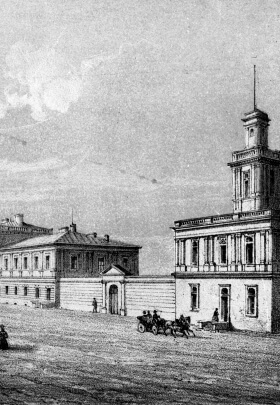 In the 19th century the Marszałkowska Street had a railway station and a private villa. 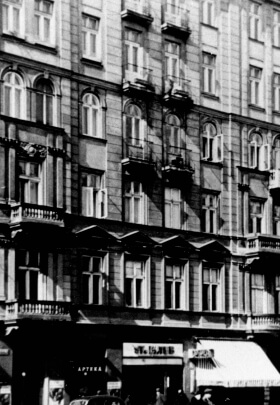 The second half of the 19th century is the time of municipal investments in the Marszałkowska street. 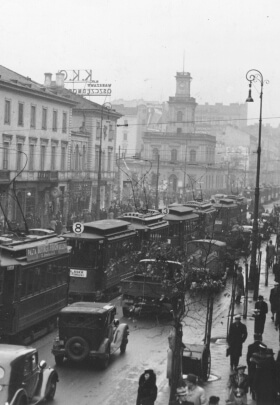 In the beginning of the 20th century the first electrical tram starts operating in Warsaw - it raises the rank of the street and adds a residential character to it. 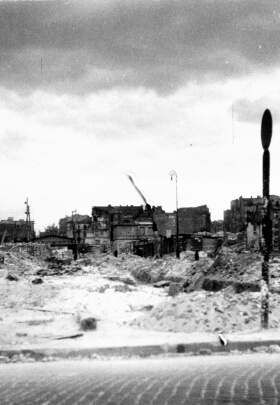 During the Warsaw Insurrection the eastern part of the Marszałkowska street remained in the German hands. 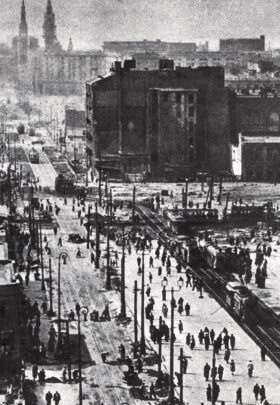 The "relics of capitalism" demolished in 1946 were rebuilt in the sixties and took the form of monotonous blocks of flats. 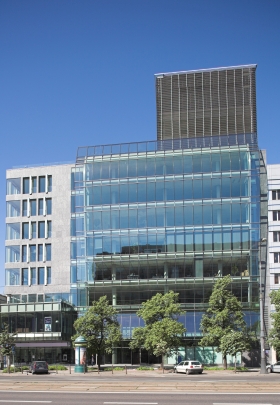 In the period before the location, that is, before the town was founded, the plot located in the north-western corner of the present crossroads of Marszałkowska and Żurawia streets was in the area of the Mazowieckie Princes property. After the location of the town (circa 1300) the area was given to townspeople and it was in the borders of Kałęczyn-Chmielnik, later called as fields of the Old Town.

In the 15th and 16th century, in effect of princely, and later royal orders, some of the land was given to clergy and friars. In the end of the 17th century the subject plot became a possession of the Missionary Priests Congregation. On the north the area was bordered with a strip of land between the present Nowogrodzka Street and Aleje Jerozolimskie, and on the south with the line of the present Wspólna street.

In the second half of the 18th century Franciszek Bieliński, later the Grand Marshall of the Crown, had the lands around the Królewska street. In 1766, to join the lands, the "Bielińska principal street" was prolonged and in 1770 it was named Marszałkowska. A concurrent street was created, called Wielka (now Poznańska) and Mazowiecka, and the crossing streets were marked on borders splitting particular plots.

Since the Missionary Priests had a lot of property, in 1766 another street was created, which was supposed to reduce the depth of the plots. It ran from Nowy Świat to the Wielka street and in 1770 it was named Żurawia. However circa 1780 the street was partially plowed, because there were not enough buyers for its plots.

Till the middle of the 19th century the traffic at the Marszałkowska street concentrated in its northern section, between the Królewska and the Widok streets. In the years 1818-23 Aleje Jerozolimskie were designed and marked and they were composed of three roads, four de-watering channels and six rows of Italian poplars. Despite this, in the area of the crossroads with the Marszałkowska street no building was raised.

There was a small revival in the south section of the Marszałkowska street in June 1845 after the Warsaw - Vienna Railway Station was built and opened. Opposite the Station – Henryk Marconi – its designer, started to build his own villa, which was finished circa 1850.

In the second half of the 19 century the Marszałkowska street was arranged, its crossing streets were extended up to 17 metres and the Żurawia street was pitched. It was also a period of an intense construction movement in this area. In the years 1860-62 in the corner of the Marszałkowska and Hoża streets the Kronenberga Tobbaco Plant was built, and 2 years later, at the crossroads of Marszałkowska and Żurawia, a two-storey tenement with facades in the Italian classicist style was built, and in 1869 in the corner with the Wspólna street, a Mechanical Plant - Woroncowa-Weliaminowa was raised. Finally, after 1870 the streets: Krucza, Żurawia, Nowogrodzka and Marszałkowska until the Zbawiciela Square were filled up with frontage.

In the years of the 20th century the rank of the Marszałkowska street increased considerably and this is because the first electrical tram line operated in its whole length. Line No. 3 was open on 26 March 1908 and ran from the Krasiński square to Rogatki Mokotowskie. At the same time in 1902 the overground telephone network was replaced with an underground cable. A new telephone switchboard building was raised at the nearby Zielna street. The above investments changed the nature of this part of the Marszałkowska street from suburban and industrial into residential.

Circa 1910 in the north-eastern corner of Żurawia and Wielka streets (now Poznańska) an office building of the Warsaw general governor gendarmerie was built. However, during the period between the two world wars the construction actions in the area of the Marszałkowska street slowed down considerably. The reason was the fact that there were no free plots under construction and the financial conditions were extremely unfavorable in effect of World War I.

The development movement increased only in the years 1936-1939.

During the Warsaw Resurrection (1 August -2 October 1944) the region of the Marszałkowska street was within the reach of combats led by the troops of Rittmeister "Zaremba". On 24 August the troops of this group "Bełt" and "Iwo" conquered the quarter between the Żulińskiego street (now Żurawia), Poznańska, Nowogrodzka and Marszałkowska. The building of the Main Office of Telecommunication, on the other side of the Poznańska street, remained in the German hands.

On 5-10 October the Germans carried out the attack to maintain the control over Aleje Jerozolimskie as the artery securing the return of their troops from the eastern bank of the Vistula river. In effect the German troops unblocked the main building of the Telecommunication Office on the side of the Nowogrodzka street and transitionally conquered the eastern side of the Marszałkowska street in the section from Aleje Jerozolimskie to the Nowogodzka street.

After the capitulation of the Upraising the civilians were expelled from the town and grouped in a temporary camp in Pruszków. Some of them were sent to unfree labour to Germany, others were sent to kieleckie and krakowskie voivodships, where they were released from trains and left alone in unknown places. In October 1944 the Germans burnt the buildings, which remained standing after the fights.

On 17 January 1945 the First Polish Army occupied the town on the left river bank in the framework of the Warsaw Operation conducted by Soviet armies and the First Belarus Front.

The Office of Capital Reconstruction, which was formed in February 1945 engaged in the process of liquidation of the "relics of capitalism". The legal basis for the activity of the Office was established by a Decree of the Council of Ministers of 26 October 1945 on taking over plots in the area of the capital city of Warsaw.

During the widening of the Marszałkowska street many houses were demolished. In 1954 in the northern frontage of the Żurawia streets, between Marszałkowska and Poznańska, three tenements were demolished and only the building of former offices of the tzarist gendarmerie, now the Śródmieście District Office.

In effect of changes carried out by the Capital Reconstruction Office, the western frontage of the Marszałkowska street was developed in the beginning of the 60s of the 20th century with banal, monotonous blocks of flats.

Till the end of 2007 the north-western corner of Żurawia and Marszałkowska remained undeveloped and its only form of management was an overground guarded parking.

Wolf Immobilien Polen Sp. z o.o. was established on 26 January 1996. The company was founded with the intention to invest in the Warsaw real estate market and is a continuity of economic activity carried out by its shareholders since 1989.

From the beginning of its activity the company focuses on gaining areas located in the most prestigious locations of Warsaw. To complete the investment tasks efficiently, the company shareholders decided to reorganize it. The uniform company structure was split and among others Wolf Marszałkowska Branch was separated from it to start business on 1 May 2002. On May the 30th 2008 the company was transformed from a limited liability company into a joint stock company.

The assets of the Wolf Marszałkowska Branch included the real estated located at the crossroads of Marszałkowska and Żurawia streets in Warsaw. Considering the location of the plot in the very city centre, the decision was made to build an office and commercial building in this area.

Prestigious location, entrusting the design work to one of the best Polish architects, prof. dr hab. Stefan Kuryłowicz and the high standard of the investment will completely meet the requirements of the most demanding clients and tenant of the Wolf Marszałkowska office and commercial building.

All designs of Wolf Immobilien Polen S.A. are distinctive with a unique architecture, high finishing standard and they are unquestionably recognizable in the Warsaw market. They were created with the intention to remain in the company portfolio as long-term investments. The company has been using the services of specialist companies for many years to realize the intended tasks, which let the company develop in the real estate market.

The legal support has been provided by such renowned law firms as Hogan&Hartson, K&L Gates, Bird&Bird.

The company financing process for many years has been based on cooperation with international financial institutions such as Dresdner Bank AG, BNP Dresdner Bank, Eurohypo, DZ Bank, Bank of China.

The financial auditing and tax advising has been provided by such renowned auditors and councilors as Ernst&Young or KPMG. In terms of real estated assessment the company has been using, among others, the services of Knight Frank.

Building commercialization and expansion planning in the real estate market is carried out with the cooperation of worldwide agencies – Cushman&Wakefield and CBRE.

The company focuses on gaining areas located in the most prestigious locations of Warsaw.